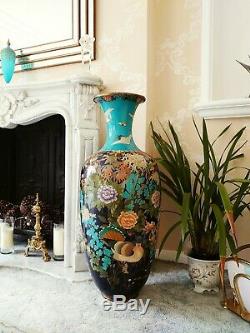 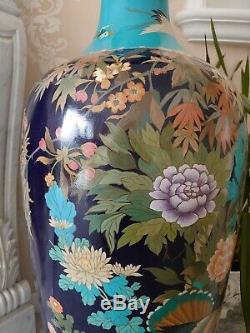 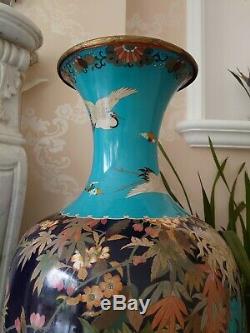 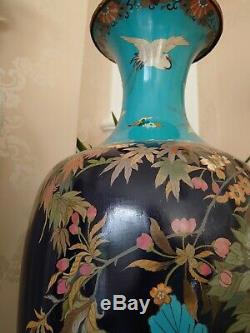 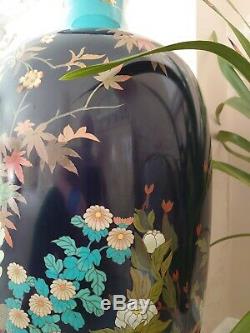 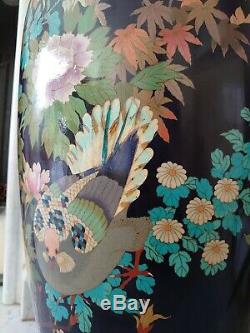 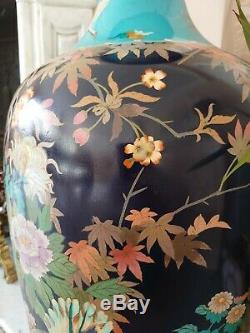 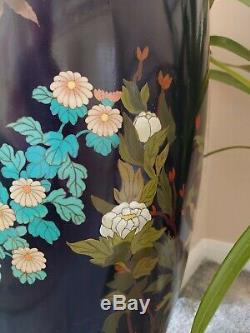 AMAZING PROVENANCE - KRISTALNACHT/HOLOCAUST SURVIVOR - OWNED BY ONE FAMILY SINCE THE 1880s more below. There are two distinct qualities or types expressed in Japanese art : one suggesting endless patience in the execution of minute detail, the other denoting a momentary conception of some fleeting idea carried out with boldness and freedom of expression in form and line-profuse complexity and extreme simplicity. The people of the West, finding these apparently inconsistent qualities existing in old Japanese art, marvelled at the former quality, and were fascinated by the latter.

While it is impossible to find either type applied exclusively to any one class of work, it must be admitted that certain branches of art industry are more adapted for the expression of one of these artistic qualities than the other. The work on Japanese cloisonne ware (shippo) generally exhibits the quality suggestive of unwearying labour and patience. A statement piece that makes its presence felt, however doesn't overwhelm. The tapered baluster body elaborately decorated with sprays of chrysanthemums, cherry blossoms and maple leaves with doves set amidst the foliage, Rich earthy enamels with iridescent highlights over deep midnight. Unsigned, however this is often the case with many high quality makers. Coben (LA) and D C Ferster, Japanese Cloisonne, 1990, p242, in discussing the apparent paradox that whilst many cloisonne objects of moderate quality were signed, much of the finest work was left unsigned. An example being artist Namikawa Yasuyuk quoted "If my work will not declare itself to be mine, then the marking will do no good". The Japanese Meiji Period is widely recognised as the era of the finest cloisonné production. With Japanese society transforming from the feudal Samurai governed system to a broadly more western society many artisans threw themselves at decorative art and in the case of cloisonné, rediscovering the technique that was then developed and perfected over this period. The craftsmanship in cloisonné work is absolutely amazing in its intricacy and beauty.. Pieces were known to take weeks to produce involving repeated firings of the enamels. DIMENSIONS' height 92cm x width 31cm.

Regarding the history/provenance of this piece.. Some information below, however as respecting the family's privacy will not advise names or give too much away in the listing. Louis'Voyage of the Dammed'.

Tipped off the Gestapo was about to arrest them, the family fled their home with very little time to gather their possessions yet decided that this not so small object had to come with them. And so they made it to Hamburg and sailed to Cuba.. The family were split up with parents staying in Cuba during the war and children further split up in different foster homes in the US.. After the war the family were reunited in the US and eventually the vase travelled on to England where it remained since. Unfortunately at some stage of the journey, the vase was dropped and damaged, these areas have been repainted/restored with the below expert opinion/condition report. This vase has been very well restored. The restoration work is barely visible to the naked eye, however you can feel the restoration to the touch, along the whole of one side indicating the vase has been dropped and dented before being very well restored.

Also signs of restoration to the flared rim. The owner of the vase until passed on to the next generation was a highly regarded member of the Jewish community not just in the UK, but worldwide.. Also awarded the OBE here.

His obituary was in all the broadsheets. So all in all a unique item.. Not in perfect condition but with an amazing history and ownership. ONLY MEIJI VASE WITH SUCH A HISTORY!! Indeed, how many objects of value were saved from Nazi destruction, looting or confiscation in this period.. Would suggest very few, especially of such proportion. The item "STATUESQUE MEIJI SHIPPO/CLOISONNÉ VASE, AMAZING HOLOCAUST/KRISTALLNACHT SURVIVOR" is in sale since Wednesday, March 11, 2020. This item is in the category "Antiques\Asian/Oriental Antiques\Japanese\Vases". The seller is "streamlinear" and is located in Uxbridge. This item can be shipped worldwide.