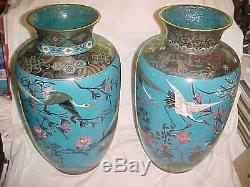 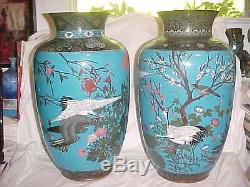 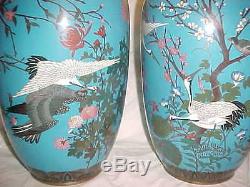 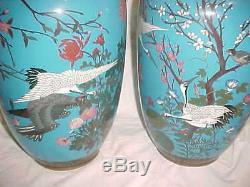 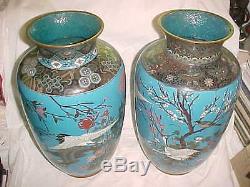 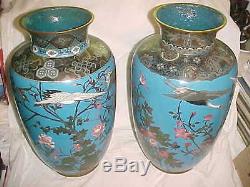 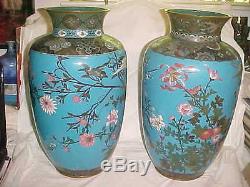 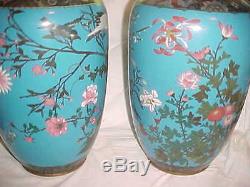 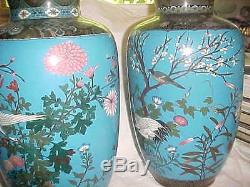 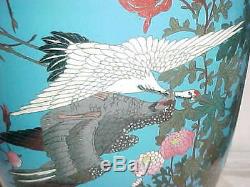 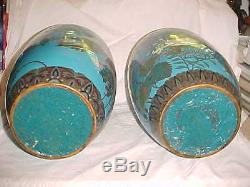 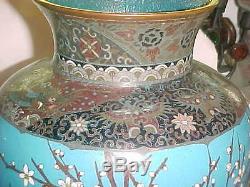 HERES A SPECTACULAR PAIR OF MONUMENTAL 18 MEIJI-PERIOD JAPANESE CLOISONNE ENAMEL-ON-COPPER VASES DEPICTING MANCHURIAN CRANES, AN EAGLE ATTACKING A MANCHURIAN CRANE, CHRYSANTHEMUMS, LILIES, CHERRY BLOSSOMS, AMONG OTHER TYPES OF BIRDS, TREES, FLOWERS, AND INSECTS ALL OF WHICH ARE SET AGAINST A GORGEOUS ROBINS EGG BLUE ENAMELING! Please Note: These top-level Japanese cloisonné vases were recently acquired from an important estate in Carmel, California owned by a well-known collector of Asian art and design. Again, each cloisonné vase measures approximately eighteen inches (18) in height, ten inches (10) across the body of the vase at its widest point, six and one half inches (6 ½) in diameter across the top of the vase, by six and one quarter inches (6 1/4) in diameter across the base. This pair of monumental Japanese cloisonné enamel-on-copper vases dates to the last half of the 19th century when Japan's new leaders realized that the historic skills of the metalworker, lacquerer, enameller and ceramic artist could play a vital part in the struggle to compete in international markets. Also, Please Note: While these Japanese cloisonné vases were intended to be a pair when created, their subject is similar but different. One of the vases displays a total of four (4) Manchurian cranes, all of which are either depicted in flight or peacefully enjoying their perch within the trees. The second vase displays a total of three Manchurian cranes, two of which are depicted in flight and one is being attacked by an eagle.

The eagle has its hooked beak grasped around the cranes neck. Condition: Very good and clean condition as recently found at an important estate in Carmel, California owned by a well-known collector of Asian art and design. There are a few scattered small scratches, a few very small unobtrusive dark spots, and a couple of very small surface markings / abrasions (but these are small and barely visible). Overall, these examples of Meiji-period Japanese cloisonné are still outstanding not to mention sizable! Manufacture of Antique Japanese Cloisonné of the Meiji Period (information courtesy the website for Guest & Gray).

Cloisonné had been made in Japan centuries before, but the Japanese had lost the skill. In the nineteenth century one keen craftsman, Kaji Tsunekichi, wanted to reintroduce it.

By destroying a piece of Chinese cloisonné he worked out how it was made and started making cloisonné himself. With the growing move towards decorative crafts during the Meiji period, the skill was taken up by others, including extremely highly skilled workmen, such as Namikawa Yasuyuki, Namikawa Ssuke (unrelated although having a common name), Kawade Shibataro, Hayashi Kodenji and many others. As with other crafts, the Japanese not only developed considerable skill with cloisonné, but they took the technique to a whole new level, unseen anywhere else in the world.

Cloisonné is essentially made by taking a base object, such as a copper vase, and laying on it a design made up of small cells (called cloisons) constructed from thin wires. Some of these cells are then filled with powdered class of a particular color and the object fired so that the glass melts to fill the cell. As the glass will shrink back as it is fired these cells are refilled and re-fired until the cell is full. The process is repeated using different colors in other cells (as each color fires at a different temperature) until the item is completely enameled with a multicolor design.

Finally the enamel, which at this stage will be dull and lumpy, is polished to give a superb porcelain appearance of a completed item. In order to make the surface stable, cloisonné around the world is generally made by covering the surface of the item with many small cells. The Japanese developed the ability to produce items with completely plain large areas, with a few small cells just in certain parts giving, for example, floral designs similar to their flower arrangements (ikebana).

They went further, developing the skill to generate designs with cells so small that you really need a magnifying glass to appreciate them fully. They started using silver, or even gold, for the wires and sometimes for the base item itself. They then went further again, making items from which part way through the process they removed the original wires forming the cells, so the item just ended up with a completely enameled surface (musen cloisonné). Alternatively they left the wires, but removed the base, generating delicate transparent glass wired items (plique-à-jour).

There are numerous other strange techniques. The best pieces of Japanese cloisonné, often just a few inches high, perhaps 2 or 3 inches, could take many months to make. When you start looking at Japanese cloisonné its easy to become obsessed with its quality. Its beauty can be outstanding. It is a relatively specialized area to collect with far fewer pieces than, say netsuke, but equally rewarding.

LASTLY, SHOULD THE WORD "EAMES" BE USED IN THE SEARCH TITLE, IT IS THERE FOR THE PURPOSE OF REFERENCING THE MID-CENTURY TIME PERIOD OF THE 1940S THROUGH THE 1970S. 14 THIS ITEM IS BEING OFFERED BY DESIGN REFERENCES -- ESTABLISHED BY A FORMER ART MUSEUM CURATOR TURNED BOOKSELLER SPECIALIZING in OUT-OF-PRINT and PERIOD MATERIALS on the PROGRESSIVE IDEAS of MODERNISM and POST-MODERNISM in DECORATIVE ARTS and ARCHITECTURE, INDUSTRIAL and STUDIO ARTS of the 19TH & 20TH CENTURIES. 15 PLEASE -- NO REQUESTS FOR PHOTOCOPIES OF THIS ITEM. I DO NOT MAKE PHOTOCOPIES UNDER ANY CIRCUMSTANCES. 16 AGAIN, COMMUNICATION IS KEY!

17 LASTLY -- WHEN OBSTACLES AND PROBLEMS LOOM LARGE AND YOU SEEM TO BE AT A STAND STILL, REMEMBER THAT EVEN A FALTERING STEP FORWARD IS BETTER THAN NO STEP AT ALL. The item "PR MONUMENTAL 18 MEIJI-PERIOD JAPANESE CLOISONNE ENAMEL COPPER VASE CRANE EAGLE" is in sale since Wednesday, December 5, 2018.

This item is in the category "Antiques\Asian Antiques\Japan\Vases". The seller is "singeldad" and is located in Scottsdale, Arizona. This item can be shipped worldwide.