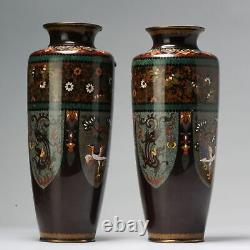 3500 "Make us an offer" Listings/. Lovely 19c Antique Meiji Period Japanese Vase Flower Bronze Cloisonne. Lovely and beautifully made piece. Originally part of the Catherina collection of Japanese bronzes and cloisonne that was partly auctioned in Amsterdam in 2006 at Sothebys.

Some pieces are pictured in the catalogue of the collection from an Exhibition on Japanese and Chinese Cloisonne in the Princessenhof Museum in 1992. Cloisonné is an enamelling technique in which the pattern is formed by wires soldered to the surface of the object to be decorated, which is usually made from copper, forming cells or cloisons, each of which holds a single colour of enamel paste which is then fired, and ground and polished. The champleve technique also uses an enamelling technique, but the cells are formed by carving into the surface ot the object, or in the casting.

The cloisonne technique has been in use since the 12th century BC in the west, but the technique did not reach China until the 13th or 14th century. It became popular in China in the 18th century. Initially bronze or brass bodies were used, and in the 19th century copper, at which time the quality of th eitems produced began to decline. Chinese cloisonné is the best known enamel cloisonné, though the Japanese produced large quantities from the mid-19th century, of very high technical quality. In the west the cloisonne technique was revived in the mid 19th century following imports from China, and its use continued in the Art Nouveau and Art Deco periods.

Vase 1 with large bumpspot, vase 2 with small area of missing enamel and some crackle line. We can not control this.

For China (& rest of Asia) & US allow at least 2 to 3 weeks. Depending on the situation it can take up to 1.5 month. This also influences the tracking data shown online. You can follow it at. The item "Lovely 19c Antique Meiji Period Japanese Vase Flower Bronze Cloisonne" is in sale since Wednesday, July 7, 2021.