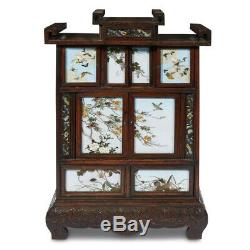 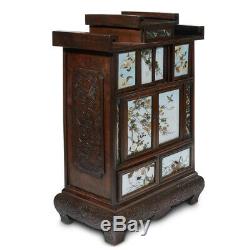 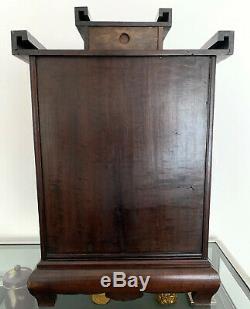 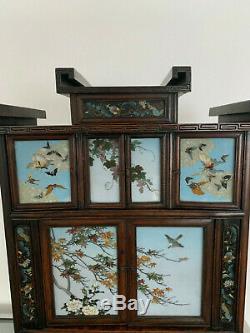 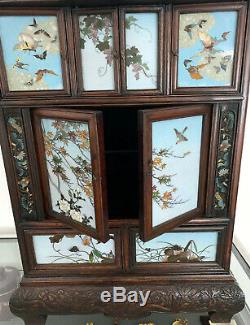 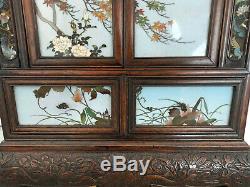 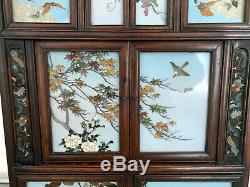 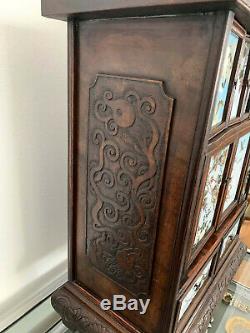 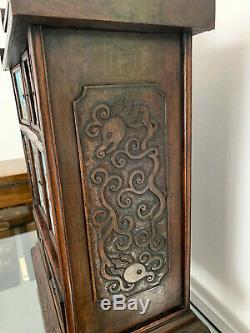 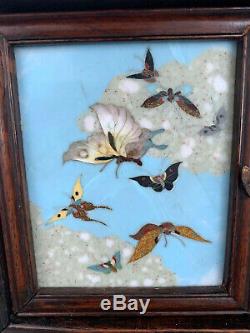 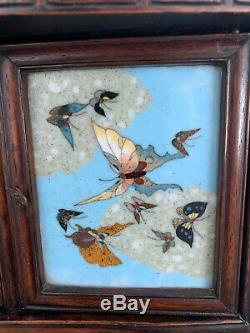 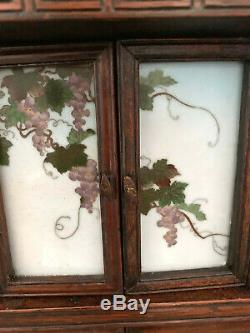 A Japanese wood and cloisonne cabinet circa Meiji period, late 19th-early 20th century. The small table top cabinet features a single drawer on top, four small doors with cloisonne panels on the second tier, a pair of larger cloisonne doors on the main level flanked by two skinny panels, and finally two drawers on the low level. It has a scroll carved base and sides as well four pagoda-shape cornices. The cloisonne panels were obviously the work of two different artist studios and were assembled on purpose to demonstrate a mixture of styles.

The small top and the two skinny panels on the main level are of an earlier scrolling design that emphasize the wire work; The rest of the eight larger panels were done in a much later and painterly style attributed to Namikawa Sosuke (18471910), whose unique naturalistic style predominates with a zen ambience. The sides of the cabinet was nicely carved with the double dragon relief. A similar but much larger cabinet in Khalili's Meiji collection attributed the work to the Honda and Namikawa Sosuke respectively.

For reference of that cabinet, see Splendors of Meiji: Treasures of Imperial Japan. Masterpieces from the Khalili Collection page 228, figure 218. The item "Japanese Table Cabinet with Cloisonne Panels Attributed to Namikawa Sosuke" is in sale since Thursday, April 18, 2019. This item is in the category "Antiques\Asian Antiques\Japan\Vases".

The seller is "gallery-t" and is located in Miami, Florida. This item can be shipped to United States.