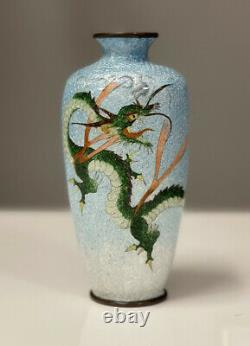 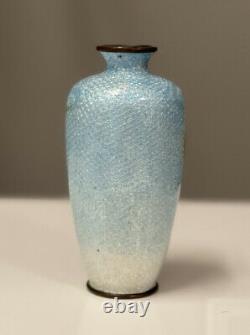 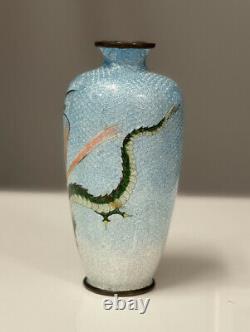 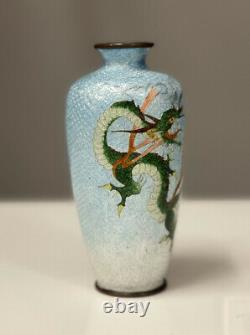 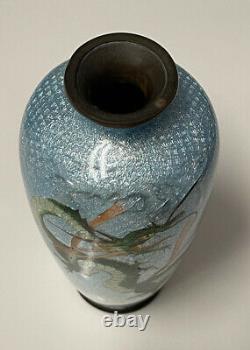 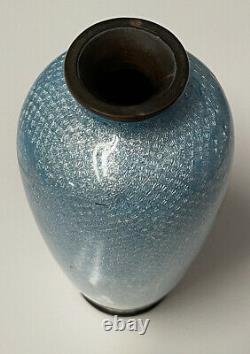 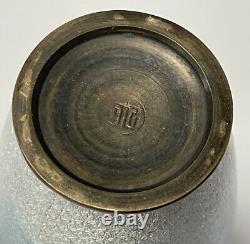 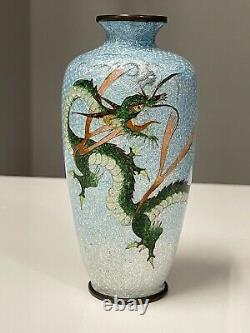 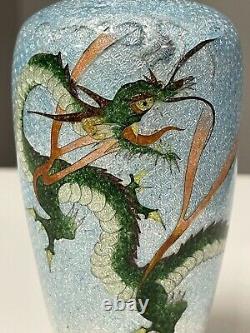 Very rare and beautiful Japanese cloisonne vase with dragon against a turquoise ombré background. The exterior of the vase is smooth with a slight rough part above the dragon head and tail, besides that the entire surface is clean and free of marks. The vase also has one tiny black pinhole mark on the back of the vase that does not affect the exterior or the primary design on the front. Dragon features smoke clouds, a dark emeralds body with light green belly, yellow eyes and talons, pink and rose tongue.

Vase is signed on the bottom with original mark. This vase is from a collection that has been kept locked in display case since the mid 70's, ready for a new home. Vase measures 4.75 in height.

Cloisonne is an enamelling technique in which the pattern is formed by wires soldered to the surface of the object to be decorated, which is usually made from copper, forming cells or cloisons, each of which holds a single colour of enamel paste which is then fired, and ground and polished. The champleve technique also uses an enamelling technique, but the cells are formed by carving into the surface ot the object, or in the casting. The cloisonne technique has been in use since the 12th century BC in the west, but the technique did not reach China until the 13th or 14th century.

It became popular in China in the 18th century. Initially bronze or brass bodies were used, and in the 19th century copper, at which time the quality of th eitems produced began to decline. Chinese cloisonné is the best known enamel cloisonné, though the Japanese produced large quantities from the mid-19th century, of very high technical quality.

In the west the cloisonne technique was revived in the mid 19th century following imports from China, and its use continued in the Art Nouveau and Art Deco periods. The item "Japanese Cloisonne Ginbari Foil 4.75 Dragon Vase Turquoise Ombré Background" is in sale since Wednesday, February 17, 2021.