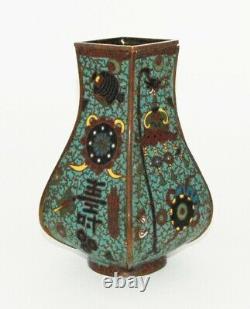 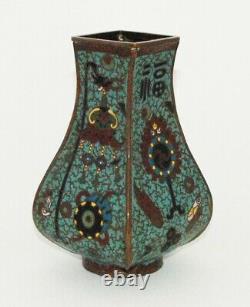 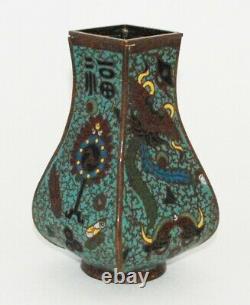 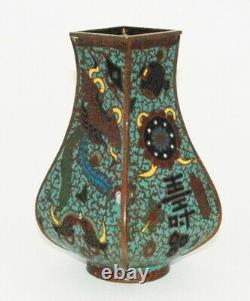 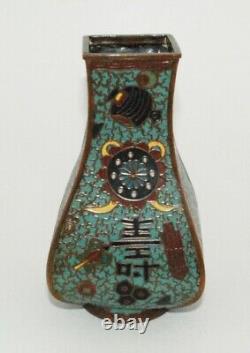 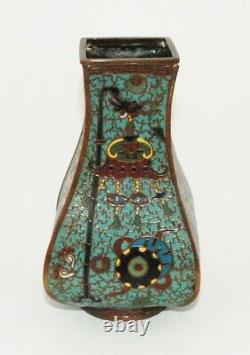 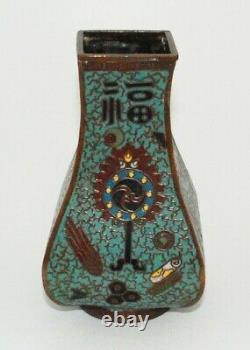 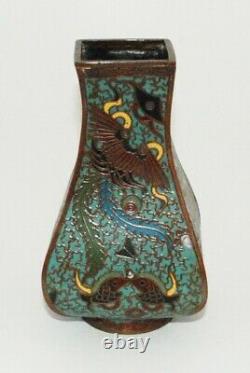 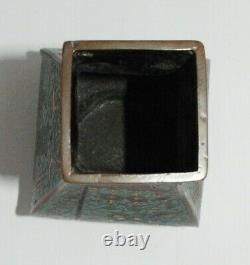 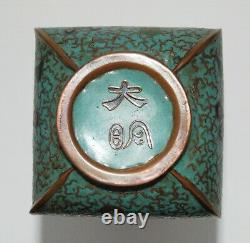 Here is an experimental early (1880 - 1900) enamel cloisonné vase decorated with what is known as takaramono which means treasure or auspicious items. As most early works, this vase is very understated with muted enamel colorations. The vase is marked on base with a false Ming dynasty mark formed in wire. This vase is categorized as experimental as there is finally some agreement in the specialist community on how the copper wire cloisons or cells were treated to create the raised wire technique. Most specialists now agree that the vase was polished by hand by traditional standard wire (yusen shippo) methods, but the final step in the process utilized an electrolysis process to create a thick layer of copper on the existing cloisons in the foundation.

The result was a wonderful piece that has wires in relief that border the enamels. The pronounced raised wires can be seen in the images; this rare technique is a fascinating innovation that is seldom seen on cloisonne works.

These early works are fascinating as they ushered in the explosive development of both technological innovation and artistic expression. This exact vase is pictured on page 10, in Chapter 2, Early - Middle Period Japanese Cloisonne Enamel, in Gary Yoshinos book entitled, Japanese Cloisonne Enamels; A Private Collectors Notes and Reference Guide. Overall, an extremely rare and early example of Japanese cloisonne that is in excellent antique condition without any major flaws including cracks, hairlines, loses or restoration.

The height of this vase is approximately 6.0 inches. The width of the vase towards the base is approximately 3.25 inches. As Japanese cloisonné enamel is very fragile, we will double box and pack this item with tremendous care. The item "Experimental Early Japanese Cloisonne Enamel Vase Treasure Items PIB" is in sale since Tuesday, October 20, 2020.

This item is in the category "Antiques\Asian Antiques\Japan\Vases". The seller is "gyassociates" and is located in Carlsbad, California. This item can be shipped to United States.